PowerCore was proud to be a sponsor of DesignCon 2016. As part of our sponsorship, PowerCore created a special set of *official* D-Con 2016 Messaging Stickers available through our PowerCore Collector App. We also produced the Mechatro WeGo Custom Show featuring works by over 40 artists which had a prominent position in the entrance hall. The crown jewel of the PowerCore presence at DesignerCon 2016 was the PowerCore Collector Quest – a digital scavenger hunt where incentivized attendees scoured the entire event venue using a PowerCore-enabled app to collect 20 characters from participating artists. Event organizer Ben Goretsky complimented, “DesignerCon loved PowerCore’s popular interactive contributions to this year’s show. From mobile stickers to the scavenger hunt people of all ages were excited to play along!”

DesignerCon was founded in 2006 under the name Vinyl Toy Network and has grown by leaps and bounds to become THE event for independent creators. DesignerCon 2016 was held once again at the Pasadena Convention Center attended by over 20,000 people and featuring over 350 vendors, art & custom shows, live demonstrations, and much more. The PowerCore team has always had close ties with the Indie Creator movement and has worked closely with many prominent innovators in the scene to create some of our first proof-of-concept applications and deployments. The PowerCore Collector Quest for D-con was the culmination of our efforts to date. 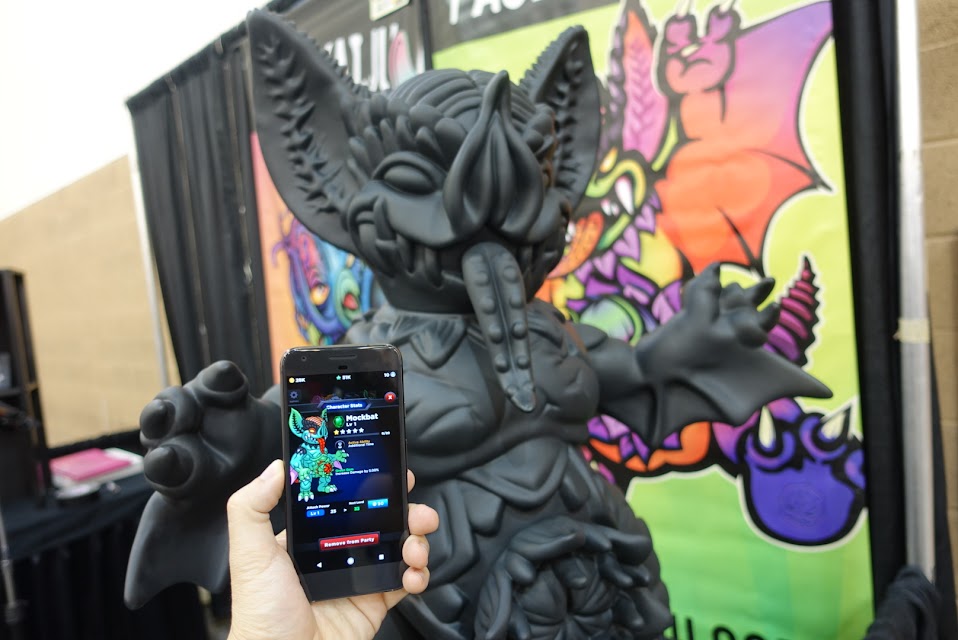 Enlisting 20 artists who were participating in the event, we placed 20 activation stations at booths around the event hall. Participants started by downloading our newest smartphone game PuzzleCore – available free for both Android and iOS. The fun little connect-three game utilizes the PowerCore Activation Platform allowing new characters to be added to the game by scanning PowerCore codes. Questers would then seek out participating booths with Activation Stations around the convention floor. At an activation station, characters could be added through NFC touch or by scanning a QR code. Once all 20 characters were collected, users would come to the PowerCore Booth to get their collection confirmed, receive their Achievement Enamel Pin and then “spin the wheel” for a chance to win exclusive toys from the participating artists. The PowerCore Collector Quest was a great success and participation went beyond all expectations. Well over half of the people who started out ended up completing the entire scavenger hunt. By the end of the event, all of the limited edition Collector Quest Achievement Pins were awarded and all the exclusive prizes had found new homes with energized event-goers. Participating vendors reported that the quest drove significant traffic to their booths as attendees discovered previously unknown artists and characters. The quest wouldn’t have been possible without the participation of these amazing creative talents. We want to thank them again for being a part of the PowerCore Collector Quest and joining with PowerCore as we connect amazing Designer Toys to exciting online experiences.

Also special thanks to DesignerCon, 3DRetro, Woot Bear, Wrong Gallery and Unbox Industries for hosting Activation Stations at their booths!